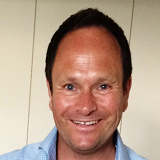 Geir is a technology focused entrepreneur and executive with over 25 years of Internet and technology related experience. He has proven execution capability and extensive global on/offshore know-how in technology, fund raising, investor relations, M&A, marketing and sales in both retail and b2b channel environments.

He has founded five technology businesses and have been through the lifecycle from incubation and fundraising to exits multiple times. He has operated not only in western markets, but also holds significant experience from managing Chinese business interests and customers. His exits have included selling companies to both private entities as well as US listed corporates.

Geir was assigned of the first new TLDs in the ICANN 2001 expansion of the Internet, which he later sold to Verisign Inc in a 2008 transaction. After this he managed one of the largest portfolios of new gTLDs competing directly with Google and Amazon. Furthermore, he managed sales, performed project management, development and deployment of a large number of internet projects in the early days of the World Wide Web.

Through his advisory capacity he is an invaluable asset for Mimir.

Geir holds a degree in Computer Science from the University of Bergen and has completed the Blockchain Strategy programme at University of Oxford – Saïd Business School. Over his career, he has advised management and owners of multiple international companies. Trough the latter he gathered considerable expertise in the areas of strategy, business development, restructurings and transactions.